I learned about Second Life quite a while ago, not the least due to the coverage by BoingBoing. Being involved in 3D design myself, I was curious to see how an interactive 3D world actually works. But on the same time I was reluctant as well, recognizing the potential for addiction in such a community. After all I have a “First Life” which feels sometimes as if it consists of a handful of seperate lifes already, so what would I need an additional virtual life for?
Probably because I am on vacation right now, curiosity won and I signed up with Second Life. I was a bit disappointed because the selection of names was limited. You could pick a first name yourself, and then select from a list of last names. I tried “Technozid Link” but that was refused. 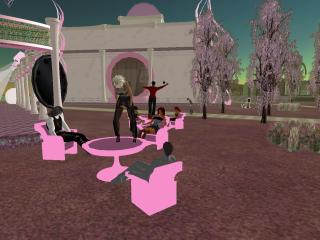 Once you sign up, your (then blank) Avatar goes through a few training stages, where you can do basic customization and learn your first steps – including flying around – in the virtual world. Thus “graduated”, the character is set loose to explore the new world. My first steps were a bit erratic. I enjoyed flying pretty much, but I wasn’t sure what I was allowed to do and where to go. After some stumbling around I found a “money tree” – a gift for new users equipping them with some cash since basically Second Life is a virtual economy of its own. In the course of my exploration I found some more trees, so my purse now holds almost 300 so called “Lindon $”. As of this writing, I am reclining in a seat watching a tabledance and get paid 2 L$ for each 10 minutes.
All the characters I talked to were very friendly. One gave me a whole wardrobe of clothing, so that I could get into something decent instead of the “newbie look”. I stumbled into three mature neighboorhoods with explicit graphics and Avatars. I didn’t mind, but I was very surprised since I have not expected this in a mostly US-based community. In one neighboorhood my Avatar got offered paid intimacy (which – even if it would have wanted, it could have not offorded anyway), and I found out that the owner of the place gets 25% revenue from all the “transactions” taking place. I mentioned to the character offering it to mee that – as far as I have seen – my Avatar wasn’t properly “equipped” for this. And without hesitation my counterpart beamed the necessary tool into my inventory…
Apart from that, it runs a bit bumpy. Textures seem to be a major problem – a lot of characters are dressed into “Texture missing” images. The world freezes a lot, teleports are often blocked. To me it looks like the server hardware can’t quite cope with the user requests.
I’m still hesitant. It looks like some fun, but I don’t know what to make of it yet. Nevertheless, if YOU are in Second Life too, drop me a line.