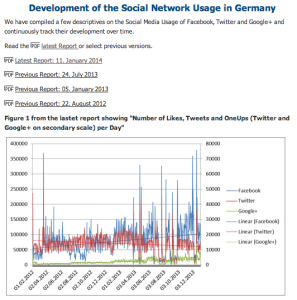 Every 6 months since 2012, the Technical University of Darmstadt, Germany, publishes a report about social networks and their relevance and distribution in Germany. While these kind of studies are rather common, the methodology used by the German researches is quite interesting. To see what relevance any given social network has, and how significant the social network usage for each channel is, they look at traditional media websites – newspapers, magazines and tv-stations, and how their posts get shared in social networks. According to their study, the social network relevance can be determined how much mainstream media gets shared on them.

How to determine social network relevance?

The scientists of TU Darmstadt look at typical publications like soccer headlines (player Mario Götze transfers to the Bayern München team), society news (Paul Walker dies in car accident) or political headlines (Chancellor Merkel complains to President Obama about her cellphone being eavesdropped). They then analyze, how often those breaking news get shared on social networks like Facebook, Twitter or Google+

One of the core findings of the report is that Google+ is gaining more marketshare. The relevance of this social network is growing fast, mostly cannibalizing Twitter. The report also shows, that Facebook is still the channel of choice for most users, and has the most reach in terms of absolute numbers. The study also confirms that the social network relevance changes with the target audience. While tabloid headlines almost exclusively get shared on Facebook, more in-depth and and journalistic news show significant shares on Twitter and Google+.

Fun fact: by far the most social exposure was given to an article by renowened newspaper Die Zeit, covering the first legal Marihuana outlet in the Berlin district of Kreuzberg.

You can find the full report of the study on social network relevance here: http://www.emarkets.tu-darmstadt.de/fileadmin/user_upload/download/Development_of_the_Social_Network_Usage_in_Germany_2013.pdf