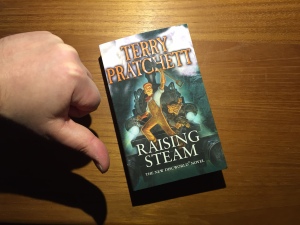 Thankful for every new book Alzheimer-suffering Sir Terry Pratchett is able to publish, I very much looked forward to the 40th novel in his Discworld cyclus, Raising Steam. Once again, Moist von Lipwig, charismatic scoundrel, director of of the Ankh-Morpork postal service, as well as director of the Royal Bank and the Royal Mint, is the main character. Von Lipwigs the-sky-is-the-limit attitude, Lord Vetinari’s schemeing and the backdrop of sprawling novelty-seeking Ankh-Morpork promised a feast for the reader, where witty comments, clever hints at current events and a general bizarreness of this fantasy world form into an opulent dessert. Raising Steam really started well, with some quite smart ideas, but then the steam evaporated. The result left me sad and reminded me of somebody who tried too hard, of a writer who wanted to pull one last firework – and failed.

I first came across Terry Pratchett in 1988. His famous Discworld-series was in the early stages, with only 5 novels published by then. Pratchett’s total lack of respect for the venerable fantasy genre fascinated me and I enjoyed the early works a lot, not expecting depth or seriousness at all, juts a good laugh. This changed in the mid Nineties, where novels like “Soul Music” or “Feet of Clay” allowed the characters to grow and develop. “Night Watch”, published in 2002, became my favourite, containing really complex character development, a very interesting twist of events and an almost dark, oppressive overall atmosphere, closely followed by “Thud!” (2005), which was the first novel the rather unblatantly refer to current events in our real world.

Raising Steam is trying too hard

Enter Raising Steam, trying to wrap up threads from “Going Postal” (2004), “Thud!” (2005), “Making Money” (2007) and “Snuff” (2011). I’m all for wrapping up loose ends, but in Raising Steam, it’s done all too pretentious. Again, Moist von Lipwig (Going Postal, Thud!, Making Money) is instrumentalized by Lord Vetinari. Again, Vetinari needs to remind him a few times that he saved him from the gallows – a favour to be taken back at any moment. Again, von Lipwig needs to apply his con artist skills to charm people into helping him. Again we read of the strange marriage of von Lipwig. Again he saves the day numerous times with his twists.

I deliberately chose the term “firework” before. What annoys me most is that the novel is full mini sidelines, that do not get exploited further. I give an example: The wizards of Unseen University appear for less than one page – and leave the impression that the author just mentioned them, to mention them. The novel would have worked perfectly well without their appearance. Their brief flash – a single rocket in a firework – left me more confused than thrilled. They should have either got more space in the book, or be left out completely. We see a bit more of the Dark Clerks in this novel, just enough to make the reader curious – and then the author stops.

On the last handful of pages, we learn that Lord Vetinari was on a 2 week leave and during his absence, a clown took his place, carefully coached by Vetinaris assistant. WHAT? That would have been stuff for a full novel! And it gets dealt with on a single page. And Vetinari himself was part of the main action all the time, camouflaged as train stoker, and that got mentioned on half a page as well. That is just sloppy, that is just trying too hard, adding more rockets to the fireworks.

There is one system-immanent problem with the Discworld novels, and it’s balancing out the various characters and factions. There’s clusters of characters: the witches, the wizards, the city watch, the dwarfs, the trolls. The heros sometimes work solo, like Vetinari or von Lipwig, or belong to a group like Archcancellor Ridcully of the wizards, Granny Weatherwax of the witches or Samuel Vimes of the watch. Naturally, whenever one of them is the main character of a book, it all revolves around her or him and the hero du jour gets all the good stuff happening. But those heros don’t act in a vacuum – if von Lipwig does a stunt in the city, the city watch has to appear sooner or later. If Commander Vimes solves a crime, the wizards often have a part in that too.

There is a tradeoff of course. If the story is about the watch, Vimes and his officers have to be the smart ones ultimately solving the case. Everybody else s background noise and often acts dumb. If von Lipwig gets the stage, he is the smart one, and therefore the watch suddenly becomes background noise and acts more dumb than ever before. A very good example is Sergeant Angua of the watch who gets a lot of space in novels about the watch due to her skillset, but is reduced to a brute and bully in the von Lipwig novels.

The same goes for Raising Steam: von Lipwig is the hero, Sam Vimes gets a small slice of action, the rest of the watch is reduced to sidekicks and comic relief.

I’m really angry about the “raised finger” and the not-subtle-at-all parallels between the grags – fundamental religious extremist dwarfs committing terrorist acts – and current events. When the topic first came up in “Thud!” I thought it interesting – bold even – but in Raising Steam it gets exploited in a shallow, stereotype way. Where “Night Watch” saw a deranged criminal and really drew up a character study where you did not know anymore who was the deranged extremist and who was the lawful opponent, where “Thud!” managed to show how extremism undermines group values and seeds distrust, Raising Steam paints a stereotype of the ugly religious extremist without any depth, without any of the political and philosophical struggles we saw in older novels.

A fantasy novel is not about realism, still Sir Pratchett has set some rules and generally tries to have his world function in a plausible way, once you get past accepting magic and a flat world carried on the back of 4 elephants and one giant turtle. The passage of time, though slightly relaxed compared to our world, is still an issue on the Discworld. Crossing distances needs time as well, instantaneous travel is impossible unless heavy and dangerous magic is involved. Given that, it annoys the hell out of me that one major plot element – the timely finishing of the railway track to Überwald – was solved by a deus ex machina, an all too convenient hat trick of von Lipwig. This alone would have been possibly a novel of its own back in the day. In Raising Steam, it’s less than 5 pages, scattered through the book.

What they say about sex also applies to this novel: even if it’s bad, it’s good. It’s a Terry Pratchett Discworld novel – most likely one of the last few we will ever read. It’s fun to read, it has some brilliant ideas, it brings back many of the people we like (one of the few things I really liked is the goblins getting more development room) and it is entertaining. Yet it leaves a bad taste in your mouth, reminding me of a checklist that had to be ticked off: Wizards? Check! Puns at French people? Check. Golems? Check. Watch? Check. Vetinari? Check. Clacks? Check. Sir Terry Pratchett offered us a fireworks, and a fireworks we got. But after the rockets blossomed up in the sky, they faded again quickly and leave – at least me – with the impression: Was that all?