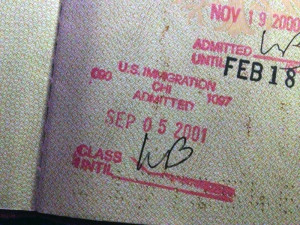 My passport stamp from US immigration upon arrival.

September 11, 2001 – a traumatic day for the whole world. Thinking I was there only days before, still makes me shiver. I arrived in Chicago on September 5 – I still have my old passport, showing the entry stamp. I was attending the “Print 01” trade show together with the US partner company of my employer. I quite enjoyed Chicago – it’s a nice and interesting city and the Great Lake had its own enchanting athmosphere. I also liked my US colleagues – they were professional but also friendly, and working with them for years made me bond with a few of them.

“Print 01” was not that much of an interesting expo though. I was scheduled to fly back on September 12, however my presence there was not really needed anymore. Some of the staff of the US guys left the expo early – only a rump crew of 4 remained. It was decided that I went back to Germany as well. I boarded my flight on September 9 from Chicago O’Hare airport and landed early morning on the 10th in Brussels. I took the day off and resumed my regular work on the morning of September 11.

I still recall when the news of the September 11 attacks broke. We stared at each other, it took quite a while before we really grasped what happened. Soon, any work we did stopped and we were glued to news websites and the radio. I immediately thought of my colleagues in Chicago.

Later, they reported that the whole tradeshow was in a state of shock. They inofficially/officially shut it down the very same day. They were stranded in Chicag0, the US skies blanketed with a no-fly ban. They eventually managed to hire a rental car at outrageous prices and took turns on the wheel riding the 700 miles back to Virginia.

Since then, I got a new passport. But I keep the old one, and occasionally look at it, realizing how lucky I was not only to get back in time – that would only have inconvenienced me – but lucky to not have been among the victims of September 11. A luck, thousands of people did not have.