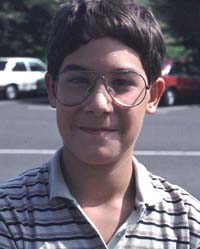 This is not Bill Gates. It’s me, ca. 1980, at the age of 13, maybe 14.
Among the Christmas presents by my mother was a CD with digitized slides (Wikipedia article on photographic slides for the younger readers) she found during a recent home improvement cleanup. The CD contained various undated images, the oldest one showing me with my baby-cousin at the age of ~7. The slides have already suffered from chemical deterioration, so the scans are pretty bad. Nevertheless they are quite valuable to me.

There were two subdirectories with images from the “Jugend forscht – Schüler experimentieren” science fair from 1982 and 1983. I participated about 5 years in a row, mostly with Biology topics, but also with IT projects.

Already at my first event I won a First Prize, and was elegible to participate at the next stage, the State competition. This competition was sponsored by IBM, and it was there that I had my first experiences with the then brand-new IBM PC. This was probably the most important milestone for my carreer path, since until then I planned to pursue an education path in biology.
The image above shows me exhausted after the award ceremony. The title of my exhibits reads “The effects of different types of water available at my hometown on germination and growth of garden cress”. We had a small creek running behind the house, plus a couple of springs and wells and of course tap water. Back in the 1980ies, the farmers were quite careless with fertilizers so the water from the creek was quite full with phosphate. Unsurprisingly, the cress watered with the creek water outgrew all the other samples, but then the plant actually got burned by the fertilizer.
I participated with two follow-up projects the next two years, and met both acclaim and criticism by locals and press. A few of the farmers did not quite like what I did, but the overall reception was good. In retrospect I have to say that fertilizer use became quite a hot topic several years later. Not that I claim credit for this though.