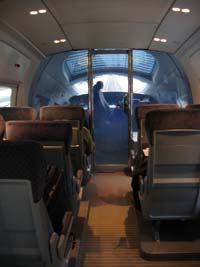 I had a speaking engagement in Frankfurt the last two days, and I decided to take the ICE train. The ride to Frankfurt was nonstop and took exactly 99 minutes, at a top speed of 300 km/h (186 mph), and since we started rather early the better part of the journey was during sunrise. About half of the ride was in fog, and that gave the whole travel a ghostly/otherworldly athmosphere.
On the ride back I was seated immediately behind the “cockpit”. In the image, the bag on the left side on the last seat is mine. The view was spectacular, and the feeling of speed was much more present than from a normal seat. Unfortunately, I could only ride until Cologne and then had to change trains, so that the journey back took almost twice as long as the ride the day before.
The speaking enagegement at the German Reprographic Association went pretty well. I enjoy speaking to crowds as well as to small groups, and the attendees on both days were very attentive, had intelligent questions and were responsive to the subject.