Well, that was quite difficult. Timeline of events:

June 2006: In an article on heise.de I heard about FON for the first time. The concept was interesting, but since I didn’t plan to use WLAN at home I dismissed it.

July 2006: A co-worker started to use FON and made me reconsider the idea. As a matter of fact I had issues connecting my Laptop to the internet with my PC as router, so the idea of using FON’s Linksys router seemed a good one.

August 6, 2006: The Linksys arrived. I spent several hours to set it up, but it never worked. The documentation was “sparse” at best, and in the end I gave up. I asked my co-worker the next day, since we share the same ISP. He told me that there was a bug in the PPPoE part of the firmware, and that I have to get in touch with FON support to get a beta version of the firmware – just as he had.

August 10, 2006: I received the beta firmware, which had exactly the same version number as the regular release. I installed the firmware, and ISP logs show that it has actually connected. Still it was not possible for me to connect either with the Laptop or the PC with the internet. I emailed support again, who began asking the very same questions as before.

August 14, 2006: Again I got the beta firmware sent. Again it had the same version number. I installed it nevertheless (not trusting serial numbers anymore), but again nothing worked.

August 16, 2006: My co-worker gave me the personal email address of a FON support employee, who was told to be very helpful in similar situations. He replied a few days later, asking for specifics. Again a few days later I got the beta firmware again (same version number).

September 6, 2006: The FON support employee emailed me that the new official firmware was available on the FON website. I went there, only to find that it was still the same version number. Needless to say it didn’t work either.

September 19, 2006: FON announces the new WLAN access point “LaFonera”. In Germany, you can order it completely free (not even shipping costs). I ordered one.

October 2006: My co-worker told me his LaFonera arrived.

November 2006: Anticipating the arrival of my LaFonera, I downloaded the OpenWRT firmware for my FON-Linksys and flashed it. Configuration took less than 5 minutes, and after that the Linksys did exactly what it was designed for without anymore hassle. Finally, after 3 months, I was able to use the unit to access the internet via WLAN. 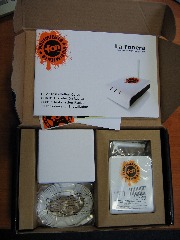 November 20, 2006: My LaFonera arrives – obviously from the second batch of units who got delivered.

November 25, 2006: I found time to install the LaFonera. Again I ran into trouble since it used the internal network 192.168.10.x – but this was the same network the OpenWRT-Linksys used. Since LaFonera downloads its configuration from FON’s webpage upon boot, it took me a bit to set it to a different network (I needed to remove the internet connection for that), but finally I managed. But finally I could connect to the internet AND offer FON service.

Bottom line: 3 months, 17.40 EUR, countless emails, frustration and two devices instead of one – but finally it works. Given the fact that I am running a (admittedly small) part of the FON infrastructure, some more dedication in firmware development and a more responsive and skilled support would have made a whole lot of a difference.