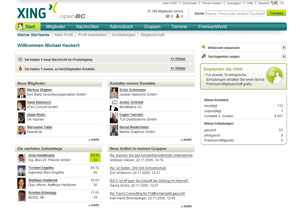 The social networking platform formerly known as OpenBC (read: Open Business Club) has renamed itself, and in the process dropped the old layout and dressed itself in a supposedly stylish Web 2.0 design. Its founders plan to go public next year, and I would be pretty surprised if we would NOT see LinkedIn buying the majority of shares, and a merger later that year. I personally don’t like LinkedIn – they are too restrictive and elitist for my tastes. OpenBC has a much more open philosophy. I hope when the merger comes the openness of OpenBC will survive.

Well, even though OpenBC dresses in a Web 2.0 suit, it’s far from being Web 2.0. Yes, there are tags. Yes, there are RSS feeds. And probably there’s even some AJAX used somewhere. But an aggregation of buzzword-technology doesn’t make an application Web 2.0. What’s missing is actually the possibility to mashup. To take things apart and put them together in new ways. And I personally would have opted for less wasting of real estate on the screen. Probably time to start having a look into user-side stylesheets.