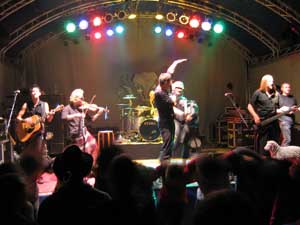 Finally Saturday evening arrived! The concert was part of the “Schicksalsfest” (Destiny/Fate festival) – a 3 day festival for fans of the Middle Ages. The setting was an old castle in Belgium, close to my hometown, and many attendees dressed in medieval costumes or phantasy costumes (a lot clearly influenced by Tolkien). Since my ticket was valid from 8pm on and the concert started at 10pm I was able to attend a very interesting demonstration of the different wrestling, knife-fighting, fencing and swordfighting techniques along with a historical explanation.

Finally the 6 Fiddlers Ralf, Stefan, Rainer, Frank, Tobias and the “new guy” Pat entered the stage. Since I never visited a Fiddler’s Green concert before, I was a bit surprised when one of their roadies – dressed with rags and a sheep’s skull – opened the concert with a ceremonial drum banging, but I was informed that this is the traditional opening of the “Folk Raider” character. I was approximately 7 meters away from the stage and once the first chords played I was glad that I had my earplugs since the sound was deafening. Well, I’m not 20 anymore, but I saw that several other people also had earplugs. Actually I was surprised to see that I was not the oldest person around. I would assume that I was at the lower end of the oldest third, but quite a lot of guests were clearly in their Fourties and even Fifties.

Lead vocalist Ralf ‘Albi’ Albers had a knee injury which forced him to wear a bandage, so he had to sit quite a lot. But this didn’t kept him from wildly moving and gesturing around. Along with fiddle player Tobias ‘Tobi’ Heindl (in typical tartan kilt) and Pat, the new guitar player who only joined the Fiddlers some 6 weeks ago), they did all the talking. Apart from being new, Pat also seems to be the youngest of the group and was subject to many (friendly) puns because he doesn’t know all the song titles and meaning of the lyrics yet. Accordeon player Stefan Klug celebrated his birthday that night and was spontaneously greeted with our regional birthday song “Hass Jeburtstach – Au hur!” which is too rude to translate and which clearly puzzled the group from southern Germany. Stefan, be assured it was meant friendly and actually it was quite an honour to receive such a chant.
The 90 minutes of concert were quite a good workout session, not only for me and the other visitors, but for the band as well. I knew almost all of the tracks excpet the 2 (3?) of the new album they are going to record soon. 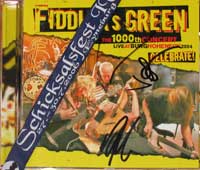 I was especially pleased when they played my favourite song “As I roved out“, especially since they gave it a Reggae-touch I never realized before (or which they evolved only recently). My other favourites were “Queen of Argyll”, “Lanigan’s Ball” and of course “Folk Raider”. I had the impression that the program was “aiming for safety”, playing more the traditional-like songs – probably due to the fact of the medieval setting. I had hoped for more modern songs like “Tangerine” or “Out of the darkness”. As for the traditional repertoire I had hoped for the “Black Sheep Rag”. But even so it was a great concert which made all of the estimated 200 guests dance one way or the other. A small group in my vicinity started to Pogo-dance on a few occasions. Though I had my share of pogo dancing when I was at the university it seemed quite out of place and a bit annoying during the Fiddler’s Green concert.

After the concert the musicians were available at the merchandising booth. I bought the “Celebrate!” CD which was recorded at their 1000th concert and had Ralf, Stefan and Tobi sign it. I also had the opportunity for a small chat with Ralf. Tobi was under siege by female fans, so it took me a while to get his autograph. I only had limited cash with me (as a precaution), so I couldn’t buy the “Fiddler’s Songbook”. However it’s available in their online shop, and since it is my birthday soon… 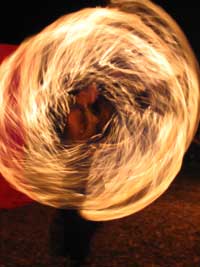 Finally, when the roadies began to pack the equipment after 2 (3?) encores, there was a demonstration by the fire artist group “Evil Flames” which was very impressive too. Nevertheless I left early since it was a rather long and tricky country lane leading to the parking field and I didn’t want to be struck in congestion in the middle of the night. I was home at about 1am and poured myself a glass of Laphroaig single malt whisky to chill down.

And what about my checklist? I should have taken a spare T-shirt since mine was soaking wet with sweat. I had too much water with me, but since I left the second bottle in the car it wasn’t too hard to carry. A towel would have come in handy too.

Thank you, Fiddler’s, for this perfect evening. I’m sure I’m going to visit one of your concerts again!