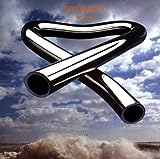 This is probably the ultimate outing as a nerd, but one of my favorite musicians, Mike Old field, has his 53th birthday today. Cheers Mike, thanks for the music!

I discovered Mike Oldfield for myself at the age of – uhmm – 13 or 14. This was around the year 1980, some eight years after Oldfield’s debut album Tubular Bells of 1972. I don’t know where I heard it first. It could have been either on the radio, at a friend of mine or at friends of my parents. But I still know what effect it had on me. I was mesmerized, and I couldn’t get the main theme out of my head.

It was the beginning of my puberty. In retrospect, that was the cruelest part in my life so far. Worrying body changes, moods no grown up could understand – or stand at all. Thunderstorms in the brain. Nothing fits, everything is awkward. Plus my parents moved to the countryside so it was 1 hour by bicycle through mountainous terrain to see my classmates. I felt locked away.

Mike Oldfield was the key to my prison. He made my mind fly, and calmed the stormy sea. I could listen to the tapes (we didn’t had CD’s back then and I didn’t had a record player so someone copied me the vinyl discs onto tape) for hours after hours. I played the air guitar on Ommadawn and I drummed with my hands to the rhythms of Hergest Ridge.
Puberty gladfully ebbed away, but Mike Oldfield kept on writing the soundtrack of my life. Platinum, QE2, Five Miles Out and Crisis where the next albums, but then something odd happened: the music didn’t touch me anymore!

Don’t get me wrong – the old albums still were important to me, though I didn’t listened to them as religiously as before anymore. But it was as if Oldfield has thrown away the key to my soul. My parents gave me Earth Moving for Christmas, but it was (and still is) one of the worst albums I ever listened to.

Mike Oldfield was an early adopter of computer technology, and nowadays he produces strange – but artistically beautiful – computer games. I think at some crossroads he and myself took different turns, but during a critical period of my life he was an important and reliable companion.

You know what, Mike: as a birthday present to you I will order your latest CD. Maybe we can meet again, after all that time, and have a Whisky together and dream of the songs of a distant past…