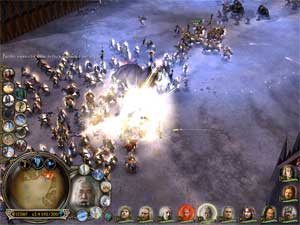 I saved Middle Earth! It took me almost 6 weeks, but I don’t complain since this is significantly shorter compared to the journey of the Fellowship.

Computer games have come a long way since my first game “Gruds in Space“. I’m not a big game person. I play the occasional game, but I rarely get hooked to one. I can only recall a couple of games at all. Gruds in Space, of course, and the legendary M.U.L.E. – which I played both on my Commodore 64. Later I switched to an Atari ST and a Commodore Amiga. I had fun with Oxyd and Midimaze – my first multiplayer game ever where you networked several Atari home computers in a ring via their build-in MIDI-interface. The Amiga was a host for the unforgettable Lemmings, which is available online in a DHTML reincarnation.

Since Amiga and Atari proved to be dead ends on the branches of PC development (THIS should get me a nice couple of flaming comments), I had to switch to a PC some time later. I am proud to say that I have been part of a crowd that ported Midimaze to the PC. Back then, we used coaxial network cables and a Taiwanese clone of a Novell NE1000 network card cost about 200 US$. Nobody (we knew) talked about TCP/IP, so we used a Novell network where the higher level protocol IPX proved to be too slow, so we used the lower level protocol SPX. We met during night in the offices of two high-tech companies where some of our team were employed, and used their corporate network and their Novell servers to play Netmaze. Imagine, one of the companies even had an Intel 80486 as their file servers CPU!

Otherwise the games on the PC weren’t very exciting – the winning margin of the home computers was pretty large, and the PC was just too expensive to use it for games. This changed over the years, but I can’t recall any game that is worth mentioning in retrospect. Enter Duke Nukem 3D! I never played the (2D) versions I or II – they were jump’n’run, and I hated jump’n’run! But Duke 3D was – well – 3D. And it was cool, easy and fun AND it was networkable! Again the corporate (Novell-)networks were a host for nightly gaming sessions. We virtually played this for years! We already had a dial-up-internet connection, so we downloaded a new map each day and played it in our lunch break.

Enter Quake – exit myself! Quake was too realistic. It was too fast for me, and it was way too fast for my hardware. Being gunned down within the first 10 seconds of the game is no fun. Since nobody played Duke3D anymore, I stopped gaming altogether. A deviation was Star Trek Voyager: Elite Force. As far as I can recall it used the Quake 2 engine, but it was not a mindless ego shooter, but was nicely embedded into the Star Trek universe and it had a real plot with lots of tactics and exploring missions. Also it gave you the ability to walk around the Voyager starship – which was nice as well.

But finally, almost 2 months ago, I read a raging review of Battle for Middle Earth, and I was instantly hooked! Gladly enough there are lots of second-hand versions available, so I had to invest less than a movie tickets price to get hold of the game. And it was – glorious! It worked nicely on my not-quite-current PC, it has a lovely level of detail, it follows the novel and the film close enough – I loved it! Until my poor gaming skills kicked in. I played the first 3 or 4 missions and it went juuuuuust smoooooth! But in the next mission, I was so devastatingly defeated that I quit playing the game for almost a week. But then I found a very cool walktrough trough the game, and even though I didn’t use it as a cheat or solution, it gave me a handful of tips and techniques which helped me to master the game. So Frodo was able to destroy the one ring about an hour ago – and I finished the game. In theory I could now restart the whole game being on the side of Evil. But I’m somehow reluctant. I’m reading Tolkiens novel since the age of 12. The whole idea to take sides with Sauron is unthinkable for me. But there are a lot of nice mods available, so Middle Earth will give many hours more of fun and entertainment. If you want to try it for yourself, get a copy and have fun!